Performing at its Best

If you are a doctor with a performing bent you really need to listen to this. It's a monologue by American actress Ruth Draper. It's not new - Ruth died in 1956 - but its a timeless masterpiece. Ruth wasn't a doctor but this piece happens to be about doctors. That's my excuse for writing about it here!

Ruth specialised in performing clever monologues that she wrote herself from her observations of the life around her. She was born in New York but performed all over the world and in many languages (including some she made up herself) and to say that she "wrote" her monologues is probably a bit misleading because, in fact, there is not a lot of evidence that she actually ever wrote them down. 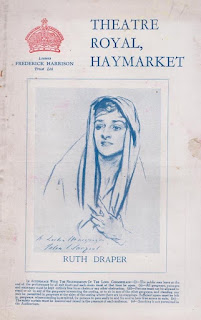 According to the website dedicated to her work Ruth had "a unique ability to transform herself into a vast array of characters". She was a pioneer of one woman theatre and much admired (as she still is) by audiences and performers alike. Sarah Bernhardt was inspired by her, Agatha Christie based characters on some of Ruth's performances and Sir John Gielgud considered himself "infinitely fortunate to have known her". He is reported to have said "I have always felt that Ruth Draper was (with Martha Graham) the greatest individual performer that America has ever given us"
Luckily there are recordings of her work made between 1954 and 1956 which are still available, like the Doctors and Diets sketch that inspired this post.
When you listen to her you will immediately see why Tom Waits was inspired to say "Ruth Draper makes movies for the ears"