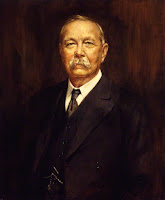 Greg De Moore and Ann Westmore's book about John Cade (the subject of my last post) drew my attention back to an old friend who was also one of John Cade's heroes, writer and physician Sir Arthur Conan Doyle.

Conan Doyle was born in 1859 and graduated from the Medical School at Edinburgh University. He spent many years juggling his medical career with his ambitions as a writer. Like many modern medical graduates he was talented in both science and the humanities.


Young Arthur had not had an easy time growing up - he was sent by his wider family to boarding school in England after tumultuous early years with an unstable and alcoholic father - a father who he was eventually to be instrumental in having committed to an asylum. His mother, Mary, was a more stabilising influence and famous for her storytelling. At boarding school Arthur honed his own storytelling skills entertaining the younger boys but he didn't try to write until a couple of years into medical school.

Conan Doyle's medical career was peppered with excitement, both as a student and after graduation. He took a year off his studies to work as a ship's surgeon on a whaling boat headed for the Arctic and found that experience so exhilarating he took to the seas again after graduation as medical officer on a ship heading for Africa. He finally settled into his first practice in Portsmouth, building it up gradually while still working assiduously at his writing. He'd already had a number of short stories published but he wrote his first novel while establishing his practice. That novel, A Study in Scarlet, introduced his best known character, Sherlock Holmes, to the world!

Literary experts cite Sherlock Holmes as an early exemplar of the "brilliant but deeply flawed' character. (Conan Doyle is said to have based the detective on one of his teachers at medical school and I have to wonder how Dr Bell would feel about that description!). The flaws in Holmes character are often manifest as very poor interpersonal behaviour - as one commentator says he is "unencumbered by social niceties". Is that why the character has had a resurgence in popularity, as evidenced by the number of film and television adaptations of the stories in recent times? There have also been many words written about Conan Doyle's other literary legacies - including his impact on writing style in the mid to late 19th century and and his part in the development of an entirely new genre, detective fiction.

It was a bout of influenza that nearly killed him in 1891, when it looked like there was going to be a resurgence of the 1889-1891 pandemic, that convinced Conan Doyle that he could not sustain a medical career and a career as a writer at the same time. The Conan Doyle website says that it was "with a wild rush of joy" that he made his decision to abandon his medical career.  (I wonder how many amongst us would feel a similar rush if we were able to make a that decision?)

When he tried to enlist during the Boer War in 1900, Conan Doyle was rejected as medically unfit. Not one to be so easily defeated he then volunteered as a doctor, a career he had given up almost a decade earlier. (Clearly there was no CPD or continuous practice requirement in the late 19th century!) Out of his war experience came a wonderful example of his versatility as an author, a 500 page work that has been described as a "masterpiece of military scholarship" called "The Great Boer War."

There's much more to Sir Arthur than the inimitable Sherlock Holmes. Conan Doyle was a talented and prolific writer and an inspiration for any doctor with ambitions follow in his footsteps!

Very interesting and his writing is so enduring!

As a medical teacher, I have always encouraged my students to read at least one short story to appreciate Sherlock Holme's power of observation. Excellent resource for clinical teaching.

I wondered how much of Sherlock Holmes and his investigative techniques were a sort of composite picture of Conan Doyle himself and his patients. So much of what we see in our medical work has the flavour of unreality, mystery, surprise. I notice myself that as i let go of my expectations about people and the medical frameworks that I use to try and understand people the more I find myself feeling my way into unknown worlds.

Thanks for providing another inspiring model.