Who Else is Coming to Camelot on Thursday? 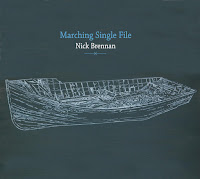 As well as the wonderful Sam Warhurst (see previous post) we are delighted to have quite a few other accomplished  medical musicians and performers on the bill this year:
Nick Brennan is a singer-songwriter who has performed for us at Camelot before. You can buy Nick's 2013 album Marching Single File in Limbo by clicking on the link - or listen to some of his work on the Triple J Unearthed Jukebox website. Nick, a geriatrician, is currently busy putting together his next album.


Also returning to entertain us is singer-songwriter Alana Bruce who regrets that her musical career has been somewhat hampered recently by her medical career. Alana's first album, Degrees of Freedom, was released  in 2009. Alana and her husband Ben Hoadley, who will perform with her at Camelot, are currently medical registrars. You can hear Alana and read about her musical career by following this link to the Triple J Unearthed website.

Come and join us for all this and much more.

Just drop in on the night or, better still,  let us know you're coming:
RSVP to Howard Gwynne howard@aya.yale.edu